Can you help detectives investigating the rape of a teenager in Southampton?

On Sunday, 2 December 2018, an 18-year-old woman was assaulted between 11pm and 11.50pm in Riverside Park just off of Woodmill Lane, Southampton.  Her name cannot be revealed for legal reasons. Read more here→.

So why, you may ask, it this relevant to Southern Health? Unforgivably, there is an alleged rapist at large as a result of its failure to report the alleged rape of a patient.

The Inquest into the death of Ellie Brabant, revealed that she returned to Antelope House, alleging she had been raped. Southern Health failed to report the allegation to the police.  CRASH believes the police would like to eliminate Ellie’s alleged rapist from their inquiries into the latest incident. It is only a possibility but such inquiries might also lead belatedly to an investigation into Ellie’s alleged rapist.

The Coroner’s Regulation 28 Prevention of Future Deaths Report on Ellie’s death identified this. The report by the charity Inquest records also that Southern Health:

Even more alarmingly sources close to Hampshire Constabulary inform us that Southern Health did not make a police report even after receiving the Coroner’s report.

Therefore, if you have any information, material or CCTV footage that can help in either incident, please dial 101 quoting Operation Scorch (Crime Number 44180450724). You can email postmaster@hampshire.pnn.police.uk too using these references We are sure it will be well-received. Please read on for more details. 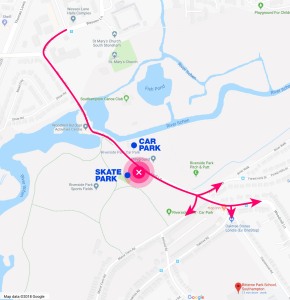 For the assault on Sunday, 2 December 2018, the police have issued the route they believe the man they are hunting may have taken. Larger image here.

If any readers were in this area on 2 December and/or have any other information, they should contact the police.

The Coroner’s Regulation 28 Report and the charity Inquest’s report on Ellie Brabant says much about alleged improvements at Southern Health.

Even in the era of Katrina ‘Teflon’ Percy, I don’t recall, for example:

I do recall late disclosure of evidence being criticised by a Coroner but, on this occasion, it was only the diligence of the Coroner, who discovered evidence on the last day of hearing, that the Trust had withheld a vital document. ***

*** Does failing to report alleged rape; failing to secure the scene; and withholding a key document from a Coroner, fulfil CPS Charging Standards for Perverting the Course of Justice² or Misconduct in Public Ofice³?

The charging decision is made by the police, working with the Crown Prosecutor. But, everyone can form an opinion⁴ using the information and links in footnotes 2 & 3.

Finally, a reminder that BBC South Today’s report on the Inquest, is available here→.

And for those who came to the Southern Health saga late, the BBC documentary ‘Broken Trust’ is now available too – here→.

² Perverting the Course of Justice is a common law offence committed when an accused:
does an act or series of acts; which has or have a tendency to pervert; and which is or are intended to pervert; the course of public justice. The course of justice starts when:
an event has occurred, from which it can reasonably be expected that an investigation will follow. The Trust knows there will be an Inquest and a police inquiry after an unexpected death so the question of reasonable expectation does not even arise.

³ Misconduct in Public Office is a common law offence, which is committed when: a public officer acting as such; wilfully neglects to perform his duty and/or wilfully misconducts himself; to such a degree as to amount to an abuse of the public’s trust in the office holder; without reasonable excuse or justification. It normally includes elements of dishonesty, concealment and cover-up. It is often used when an alternative offence does not give the Court adequate sentencing powers.

⁴ DISCLAIMER – facts around the incidents described in this post are attributed (as shown) to the Coroner and Hampshire Police. Related observations are opinion only and should not be interpreted as implying any misconduct on the part of any individual persons or persons. That is a matter for the CPS, police and/or relevant Regulators.