“The rule against bias is one thing. The right to be heard is another. Those two rules are the essential characteristics of what is often called natural justice [our bold].

“No one who has lost a case will believe he has been fairly treated if the other side has had access to the Judge without his knowing.”

The Privy Council and (in another case²) the House of Lords established that the law of natural justice is not restricted to judicial decisions: it applies also to quasi- and non-judicial decisions, which are of a judicial nature.

We believe the law of natural justice applies to NHS complaints processes too. Indeed, notwithstanding this, complainants have a right to a fair hearing under Article 6 of The European Convention on Human Rights.

Department of Health guidance to NHS complaints handling effectively confirms this with words such as, fair, open, transparent and unbiased. We provided compelling evidence that Southern Health’s complaints process is akin to a Kangaroo Court, in which the principles of law and justice are disregarded or perverted. Read more here→

CRASH recommends that those making complaints against Southern Health should insist that the process conforms to ‘the law of natural justice.’ It is important to insist on this in agreeing the Terms of Reference (“TOR”) before an investigation commences: it requires patience, persistence and robustness – one recent complainant reached Version 10 of the TOR before Southern Health even came close to agreeing a fair and transparent process.

Another essential element of a fair process is ‘equal access to evidence’; sometimes referred to as ‘equality of arms.‘ Again complainants must be persistent and robust in ensuring that the patients’ data are complete and accurate.

On 28 April 2017, Southern Health’s Interim Head of Patient Engagement and Experience announced a workshop allegedly to involve current service users, families, carers, and staff in developing understanding and information in respect of confidentiality and information sharing.

“We are doing this because feedback from all groups indicates there is frustration and confusion about what can and cannot be shared…. We want to improve that situation.”

CRASH was unable to attend but submitted a paper on the subject. Southern Health did not even disseminate it to its own officials, who were facilitating the workshop, much less the delegates! 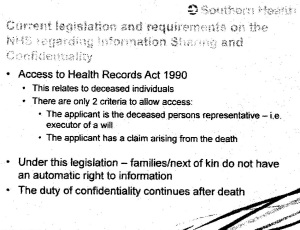 Even more alarming, subsequently we learnt that Southern Health actually misinformed bereaved families and others about The Access to Health Records Act 1990. Opposite is a slide used at the workshop→

The Access to Health Records Act 1990 does not state that access is permissible if, “The applicant has a claim arising from the death.” Section 3(1)(f) of the Act states specifically:

“Any person who may have a claim arising out of the patient’s death [bold added].”

The Trust’s omission of, “May” perverts the meaning of the Act significantly. It is evident that many bereaved families may have a claim but they will not know if they have a claim without sight of the records. Also, Southern Health’s definition of the deceased person’s representative is far too restricted in this context.

The feedback received from the delegates at the workshop is almost universally negative.

“The tone of the slides was reflected both by how the presentation was delivered and also by the SHFT leaflet that was put out ahead of the meeting.

“The two leaflets, one from SHFT and the other by NTW [Northumberland Tyne & Wear NHS Foundation Trust]…, could not be more different. The SHFT one addresses the patient and is a very dictatorial this is what information we hold about you and why. This is what we can and will do with it. In contrast the NTW leaflet is written for the carer/family, recognises their important role in the Triangle of Care, and how this benefits the patient. It addresses the issue of what will be done to share as much relevant data with the carer as possible in order to strengthen this approach and make it more beneficial for the patient.

“There are too many [name] in the Trust that drag it down. Let’s hope the new Chair and new CEO have the strength of character to see this and weed them out.

“By contrast there were a couple of younger members of staff present at the meeting who did impress me. They see the future different to the likes of [redacted]. They buy in to the way we see it. Let’s hope that with the change in Executive these people are identified and nurtured so they float to the top.”

CRASH does not know the names of the “Young members of staff”.

Once again, Southern Health engaged in a process intended to show that the culture is improving but achieved exactly the opposite by distorting and/or omitting facts. In particular, misquoting an Act of Parliament is unforgiveable.

As a result, CRASH submitted a revised paper to the Interim Head of Patient Engagement and Experience containing the original content and two further pages added as a result of feedback. Download here: A Common-sense Approach to Information Sharing

We asked how Southern Health would remedy the misinformation. This is the response:

“Thank you for the papers you prepared on Information / data sharing, which will have taken you some time to research and write. I appreciate the time and trouble you have gone to, to provide us with this important information.”

Conveniently overlooking that they didn’t use it!!

Just to ‘stick the knife in’, when we asked Southern Health to remedy the errors above, we were criticised for causing too much work for officials – conveniently overlooking that they caused the extra work by disseminating erroneous information in the first place.

An interesting variation of ‘mother blame‘.

No one who has had a complaint rejected by Southern Health will believe they have been fairly treated if Trust staff and officials have had sight of a draft report and an opportunity to challenge it without the same opportunity to view and challenge it.

2 thoughts on “The Scales of Justice?”