Valerie Walsh – resigned as peer support worker to protect her health after being given “dressing down” for challenging things happening under Katrina Percy’s regime, likening it to the North Korean Congress – nobody dare challenge her. Read more →

Jade Taylor – lost close family member in the Mid Staffs scandal; a whistle-blower in the NHS; and attended The Shambles, where she was deeply disturbed to find nothing had changed since the Francis Report.

Leader of rebel governors: quiet and thoughtful but stands up square and firm to Tim ‘bovver boy’ Smart in the face of threats.

For standing up to Tim ‘bovver boy’ Smart alongside Peter Bell and attending ‘The Shambles‘ despite threats of removal.

Will these be promoted to supermen/women or relegated to chickens? Failed to attend ‘The Shambles‘ so have they succumbed to the bovver boy’s charms? The jury is out!

There are a few candidates in mind but, having witnessed Tim ‘bovver boys’ Smart’s intimidating tactics, we are reserving judgement (see above). The jury is out. 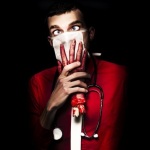 One can only sympathise with staff governors in an organisation  akin to the North Korean Congress. There are stories of one being in tears at a meeting because they feel powerless.

We suggest just doing your best to uphold staff morale – campaigners hold nothing against you.

Heads in the Sand

Andrew Joy and Paul Lewsey – too concerned about exposing their Councils’ serious failings (under their joint service agreements with Southern Health) to be of any use at all as governors. Bullied by Council officials into not meeting patients.

Adrian Thorne – huge disappointment as he represents Carers Together Hampshire. Failed to attend ‘The Shambles‘ to meet carers. Any carers out there should have a word in his ‘shell-like’.

Andrew Jackman – collaborator² with the Board.

Traitor to the public he is supposed to represent, with a massive and largely undeclared conflict of interest. Read more →

Deserving of a dedicated blog post – but a waste of space [pun intended].

¹ Originally, 忍者 (Ninja) seemed appropriate for Peter Bell – a covert agent, infiltrator or assassin in feudal Japan.  However, their covert methods were deemed “dishonourable” and “beneath” the samurai caste, who observed strict rules about honour and combat.

侍 (Samurai) were the military nobility and officer caste of medieval and early-modern Japan. Peter’s robust and honourable defence of governors’ rights and support for family representatives in the face of threats makes him far more Samurai than Ninja.

² The word ‘quisling’ originates from the Norwegian war-time leader Vidkun Quisling, who headed a domestic Nazi collaborationist regime during the Second World War.

“To writers, the word Quisling is a gift from the gods. If they had been ordered to invent a new word for traitor … they could hardly have hit upon a more brilliant combination of letters. Aurally, it contrives to suggest something at once slippery and tortuous.”

He was executed by firing squad at on 24 October 1945. The word “quisling” has since become a synonym for “collaborator” or “traitor,” reflecting the very poor light in which Quisling’s actions were seen, both at the time and since his death.