This is part of an email exchange between NHS England (Wessex) and Southern Health that led to the joint meeting on 4 February 2014. It is evident now that Southern Health was fearful of meeting and tried every excuse to avoid it.

This is perhaps the most dirty trick of many … and libellous. 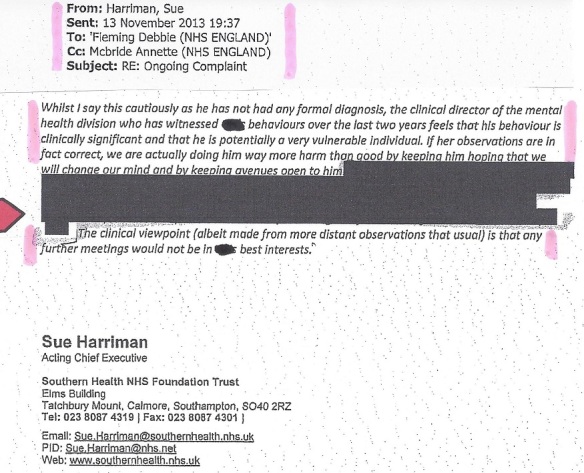 The patient had never met or even spoken to Dr Stevens during his four days of unlawful detention by Southern Health or in the subsequent 2 years and 2 months. One of Southern Health’s more competent Consultant Psychiatrists, Dr Roger Palmer, wrote on discharge:

When I reviewed [him] on 12.09.2011, three days after his admission, he did not display any acute psychiatric symptoms. He has been under quite significant ongoing stresses, of which you have been aware. The report from his family suggest that he has been quite excited and overly fixated [redacted for legal reasons] in recent weeks, but there was nothing in their view, or of that at the team at Woodhaven, to suggest this represented a switch in to mania.

Yet apparently Dr Stevens (“Albeit made from more distant observations that [sic] usual”) diagnoses the patient’s conduct: as, “Clinically significant” and describes him as:

All in an attempt to avoid a meeting: one wonders what gems hide behind the redaction.

This is just an extract from a long email: the rest may feature in a future blog post but one notes from an earlier page the comment of Sue Harriman:

“[The ex-patient] has threatened to report me to the NMC when my relationship is not a clinical one but one as acting CEO (indeed, I had no clinical or leadership role in the mental health service where the incident happened.”

So, Ms ‘Hello Sailor’ Harriman, the NMC Code of Conduct (including the duty of candour) goes out of the window when you get into the dizzy heights (by job title and salary) of directorships! The Code includes, for example:

“You must make sure that any information or advice given is evidence-based. Exercising your professional ‘duty of candour’ and raising concerns immediately whenever you come across situations that put patients or public safety at risk.”

So apparently it is evidence-based to give NHS England the opinion of a medic who has never reviewed or spoken to a patient and it is consistent with her Duty of Candour to dissemble at a meeting with  NHS and Department of Health officials to ‘bury’ incidents that could put other patients at risk.

Harriman also was Acting CEO during the early months after the Connor Sparrowhawk tragedy, where the Duty of Candour [and transparency] seems to have gone AWOL too, along with the Military Code of Honour implicit in anyone who has served our county.

The was an earlier alleged scandal naming Harriman at Fordingbridge Hospital, run by the Hampshire Primary Care Trust, which eventually became Southern Health.

It is naïve to believe that Registered Nurses in senior roles should be more aware of and act upon all serious ‘near misses’, which could have implications for patient safety – more so than the six (probably) junior nurses who Southern Health allegedly reported to the NMC. 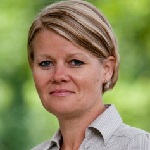